Gender inequality is addressed through the lens of art history as Angela Lorenz talks about her exhibition “Victorious Secret,” on display this fall in a new wing of Penn’s historic Franklin Field.

Created from buttons and hairpins, her life-sized mosaic panels of competitive women athletes from ancient Rome are based on originals in Piazza Armerina, Sicily, a UNESCO World Heritage Site. In modern times these original mosaics were thought to be “dancing bikini girls.”

The exhibition is a tribute to archaeologist Isabella Baldini Lipolis and a celebration of the 40th anniversary of Title IX.

Angela Lorenz is a visual artist and an author based in Bologna, Italy and New England. Lorenz is known for her use of unusual materials in her art work, including soap, ice, rubber, coffee, spaghetti and herbs, as well as for her interest in printmaking and artist’s books.

She has studied at the Rhode Island School of Design, and the University of Bologna, where she apprenticed under the book binder Paolo Bugetti. She holds a BA in Fine Arts and Semiotics from Brown University.

Lorenz has exhibited her work in locations all over the United States and Italy, as well as in Canada and Germany, including the New York Public Library, The National Museum of Women in the Arts, the Los Angeles Municipal Art Gallery, and the School of the Museum of Fine Arts Boston Library.

Lorenz’s artists books can be found in special collections and rare books libraries around the world. Some of Lorenz’s artist books, as well as a catalog of an exhibition of her artists books, are housed at Penn’s Kislak Centre for Special Collections, Rare Books and Manuscripts. 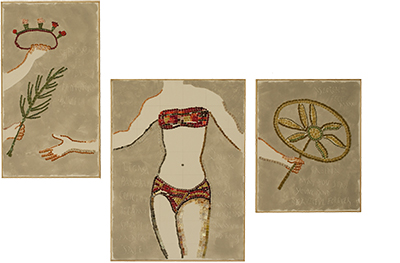 Images. Prizes and Hoop: woman receiving a victory palm and a crown for winning the hoop race (trochus), copyright Angela Lorenz (2012-2013), mosaics created out of buttons and hairpins mounted on acid-free foam board with graffiti from Pompeii and Herculaneum on faux cement ground.