Created from buttons and hairpins, Angela Lorenz's life-sized mosaic panels of competitive women athletes from ancient Rome are based on originals in Piazza Armerina, Sicily, a UNESCO World Heritage Site. In modern times, these original mosaics were thought to be “dancing bikini girls.” The exhibition is a tribute to archaeologist Isabella Baldini Lipolis and a celebration of the 40th anniversary of Title IX.

Join us on October 21st at 5:00, when Angela Lorenz will give a talk about "Victorious Secret," addressing gender inequality through the lens of art history. If you miss seeing the exhibition before her talk, her work will be on display in a new wing of Penn's historic Franklin Field through February 15th, 2016. 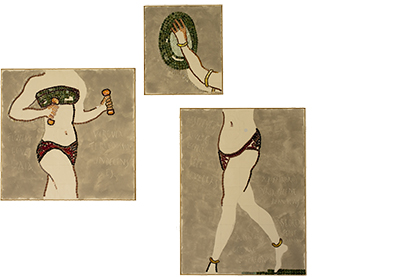 Images (top to bottom). Prizes and Hoop: woman receiving a victory palm and a crown for winning the hoop race (trochus), one of the events in men's and women's elite games. Discus: the women athletes are holding weights for long jump (halteres) and a discus, which were sadly interpreted as rattles and a tambourine after the mosaics came to light in the 1950's. Copyright Angela Lorenz (2012-2013).