Lecturer in Psychology, University of Pennsylvania

Professor of Psychology, University of Pennsylvania

The notion of the afterlife is as puzzling as it is necessary. While its existence satiates our existential dread of annihilation, we cannot grasp the position of the afterlife in relation to other forms of time and how the existence of one’s own afterlife relates to the afterlives of others. Some of the most powerful minds in history, from many cultures over many years and most religions, have developed elaborate accounts of life and afterlife, aiming to solve the puzzle and ease existential distress. And they are not alone—human beings have struggled for centuries to find meaning in their increasingly diverse world. Death challenges the meaningfulness of life, and the thought that some part of a person continues beyond death responds to the challenge. Our conception of a soul and afterlife soften the potentially paralyzing recognition of mortality. In their lecture, Gordon Bermant and Paul Rozin attempt to quantify the puzzle of the afterlife and its function as manifested in religion and psychology.

Gordon Bermant is a Lecturer in Psychology at the University of Pennsylvania. He received a Ph.D. in Psychology from Harvard University and a J.D. from George Mason University.  At Penn he has taught seminars in The Embodied Mind, Psychology & Religion, Psychology & Law, and Judges & Judging. He is also a Lecturer at the Institute of Buddhist Studies (IBS) in Berkeley, California, offering an online seminar in Buddhist Psychology to students at IBS and other seminaries in the Graduate Theological Union. He was tenured at the University of California, Davis, in 1968, and taught at the University of Washington from 1970 until 1976 while serving as a Center Fellow at the Battelle Seattle Research Center. Between 1976 and 1997 he was a researcher and manager at the Federal Judicial Center, which is the research and training agency of the federal court system. In 1986 Gordon became a student of Reverend Kenryu T. Tsuji at the Ekoj Buddhist Temple and has practiced Shin Buddhism since that time.  In 2006 he was elected to a two-year term as President of the Buddhist Churches of America.

An expert in cultural psychology, Paul Rozin is interested in the role of food in human life, positive psychology, and the meaning of "natural" and positive and negative memories. Using the response of disgust as a jumping off point, Rozin’s work on food includes comparative studies of food attitudes and the function of pleasure in cultures including the USA, France, India and Japan. He explores which environmental factors (such as portion control) play a role on food intake, and how certain preferences arise from cultural attitudes. His interest in the disparity between perception and reality of cultural tendencies also includes the study of real vs. fabricated memories. Behind all of this is a general interest in cultural evolution and the stories we tell ourselves in order to survive. Dr. Rozin is a member of the Society of Experimental Psychologists, has twice been a fellow at the Center for Advanced Study in the Behavioral Sciences, was a visiting Scholar for Phi Beta Kappa, and a Visiting Scholar for one year at the Russell Sage Foundation. He is a member of the American Academy of Arts and Sciences and a recipient of the American Psychological Association Distinguished Scientific Contribution Award for 2007. He was an editor of the journal, Appetite, for ten years. 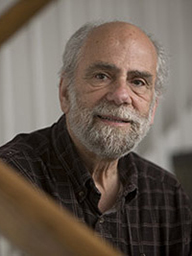 Top image: Illustrations to Robert Blair's The Grave, object 9 The Soul Hovering over the Body