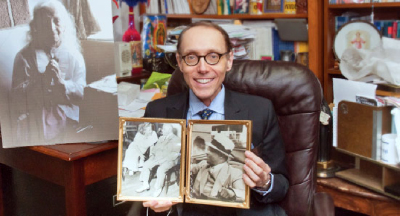 Leonard Norman Primiano is Professor and Chair of the Department of Religious Studies, and Co-Director of the Honors Program at Cabrini College, Radnor, Pennsylvania. With a Master of Theological Studies from Harvard Divinity School and dual doctorate in Religious Studies and Folklore and Folklife Studies from the University of Pennsylvania, he teaches courses in the history of Christianity, vernacular religion, religious folklife, sectarian religion and contemporary American religion. A recipient of the Lindback Distinguished Teaching Award and in 2014 of The Kennedy Center/Stephen Sondheim Inspirational Teacher Award, he was also in 2014 elected a Fellow of the American Folklore Society. He is currently serving as editor for the six-volume A Cultural History of Religion. (Bloomsbury Press); Vernacular Catholicism: Essays in Folkloristic Ethnography (University of Utah Press); and with Sabina Magliocco, of the on-line text, Informal Knowledge in Complex Societies: Folklore in the Contemporary World. His essay, “Kitsch and Religion,” will soon appear in the Companion to Religion and Popular Culture (Routledge Press).

The Complexion of God: The Spiritualized Aesthetics of Color in Father Divine’s Peace Mission Movement

My project concerns the intersection of color and meaning in American sectarian religion, specifically examining the use of color in the African American minister Father Divine's “International Peace Mission Movement.” This American indigenous intentional utopian celibate inter-racial religious community has resided in Philadelphia and its suburbs since the early 1940s. My examination of their sectarian creativity is focused on the spiritualized meaning of color as it is used in the arrangement of flowers -- as well as the spiritualized art of flower arranging itself by the female adherents of Father and Mother Divine for their religious spaces, places, and ritual occasions. As my project reveals, the deliberate use of texture and color in flowers, and in other expressive aspects of their lives such as clothing, is indicative of a remarkable joined theology of race and spiritualized aesthetics of color begging to be studied in its American distinctiveness.