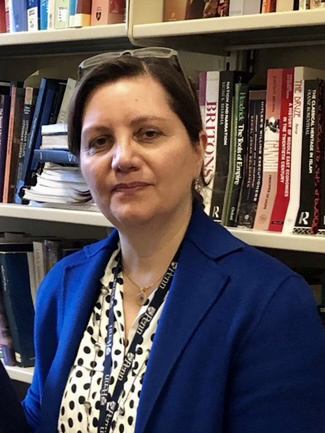 Firoozeh Kashani-Sabet is Walter H. Annenberg Professor of History at the University of Pennsylvania. Her research focuses on borderland histories of the Middle East, identity politics, and ethnicity. Her current project considers the historical migrations and displacements of Iranian and Persianate communities over time and space. She has also worked extensively on gender studies and the social histories of medicine, disability, and hygiene. Dr. Kashani-Sabet enjoys creative writing and has published both poetry and fiction to narrate the stories of displaced Iranians.

Tales of Trespassing: Borderland Histories of Iran, Iraq, and the Persian Gulf

The story of the modern Middle East often follows a national trail. By contrast, my book project,  “Tales of Trespassing,” chronicles the ways in which itinerants and migrants have transgressed  the borderlands of Iran, Iraq, and the Persian Gulf in search of economic opportunities and  social mobility. I explore the co-existence, and subsequent virtual erasure, of long-standing ethnic  communities from Basrah, Baghdad, and the Gulf coast, beginning in the mid-nineteenth  century through the establishment of the mandate system and beyond. The Shia-Sunni battle  that now wages in much of the Middle East has its roots in ethnic rivalries that, after the advent  of state nationalism, resulted in the imposition of a dominant identity, and simultaneously the  suppression of other local languages and cultures. After WWI, many Middle Eastern nation states espoused mono-lingual and mono-ethnic identities that disadvantaged their culturally  diverse populations.

In this study, I document the intermingling of ethnic Arabs, Persians, Turks, Kurds, Baharna,  and others through stories of trade, pilgrimage, intermarriage, disease management, and  smuggling in a distinct geographic setting and era. I limit my study largely to Iran, Iraq, and the  southern Persian Gulf coast given that much changed in the region due to the intervention of  British imperial policies. I trace the ways in which sectarian upheavals intensified in times of  distress such as plague epidemics or international crises. As states developed and improved  mechanisms for policing their borders (such as the use of passports, quarantines, and custom  houses), migrants and settlers adapted and found new ways of alternately succumbing to, or  trespassing, state surveillance. What impact did these changes have on claims over land  ownership, natural resources, and belonging?

My research considers the myriad ways in which an understanding of borderlands can inform  our knowledge of Ottoman Iraq, Iran, and the Persian Gulf through commerce, consumption,  the sharing of natural resources, and social contact -- all of which had an enormous impact on  the daily lives of individuals in the region.