In "Music from Exile," which debuts at the Penn Humanities Forum on Violence, the Daedalus Quartet explores the music of composers who were forced into various states of exile by the Third Reich. From those composers who were arrested and never completed the journey to exile, to those who spent the war far from home, the effect on the music they produced was profound.

Taking center stage is Arnold Schoenberg's "Ode to Napoleon," a musical melodrama based on a poem by Lord Byron for string quartet, piano, and narrator. In the poem, Byron took aim not only at Napoleon, but at all dictatorship. Likewise Schoenberg, in composing this work at the height of the Second World War (1942), meant to express "the moral duty of intelligentsia to take a stand against tyranny."

Praised by The New Yorker as "a fresh and vital young participant in what is a golden age of American string quartets," the Daedalus Quartet has established itself as a leader among the new generation of string ensembles. In the 13 years since its founding, the Quartet has received praise from critics and listeners alike for the security, technical finish, interpretive unity, and sheer gusto of its performances.

The Quartet has forged associations with some of America’s leading classical music and educational institutions: Carnegie Hall, through its European Concert Hall Organization (ECHO) Rising Stars program, and Lincoln Center, which appointed the Quartet as the Chamber Music Society Two quartet for 2005-07. The group has been Columbia University’s Quartet-in-Residence since 2005, and has served as Quartet-in-Residence at the University of Pennsylvania since 2006.

The group has performed in many of the world's leading musical venues. In the United States and Canada, these include Carnegie Hall, Lincoln Center (Great Performers series), the Library of Congress, the Corcoran Gallery in Washington, D.C., and Boston's Gardner Museum, as well as on major series in Montreal, Toronto, Calgary, Winnipeg, and Vancouver. Abroad the ensemble has been heard in such famed locations as the Musikverein in Vienna, the Mozarteum in Salzburg, the Concertgebouw in Amsterdam, the Cité de la Musique in Paris, and in leading venues in Japan. 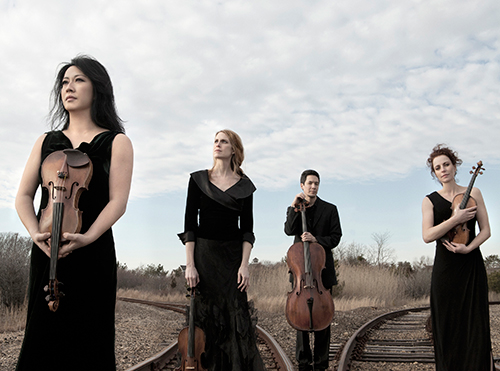