Renowned for its tonal unity and technical virtuosity, the exquisite, award-winning a cappella ensemble Anonymous 4—in Philadelphia for one night only—performs Long Time Traveling, a vibrant portrait of the roots of Anglo-American music.

Don't miss this haunting and inspirational program of some of America's most beautiful and enduring folk songs, religious ballads, spirituals, and gospel hymns from the group’s newest album, Gloryland, which Amazon.com named one of the best folk CDs of 2006.

Gloryland is inspired by the group's critically acclaimed American Angels. Number 1 on Billboard's Top Classical Albums chart in 2005, the CD remained on the chart for 76 weeks, selling more than 80,000 copies. Amazon lists this runaway hit among its “Top 100 Overall Customers’ Favorites” spanning all music categories.

"The vocal ensemble sensation of the decade."—CD Review"

"For sheer radiance, no one else comes close."—Billboard

"This performance of Long Time Traveling is the diary of our two journeys to the roots of Anglo-American spiritual vocal music. We sing nineteenth-century folk hymns and camp revival songs from the rural South, gospel songs originating in Northeastern cities and adopted in the late nineteenth century by rural Southerners, and a few more recently composed tunes as well. Each of these musical styles has played its own part in an interweaving of oral and written traditions, in which favorite older tunes have survived and flourished from one generation to the next. We love the fact that these tunes have been treasured by so many others before us." —Anonymous 4 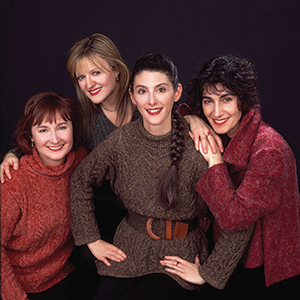 The Penn Humanities Forum gratefully acknowledges the support of Penn's Office of the Provost, Music Department, and McNeil Center for Early American Studies.