The Kin Who Count, and Those in the Shadows...

The Kin Who Count, and Those in the Shadows...

The Francis Lee Higginson Professor of History and Professor of Studies of Women, Gender, and Sexuality, Harvard University

During the nineteenth century across the Middle East, ideas about what did and should constitute family changed dramatically over a relatively short time. The ideal family became conjugal, and the ideal marriage became a companionate one based on love and preferably monogamous, rather than something arranged by parents and possibly polygynous.

Changes in family law were more varied. Practices of everyday life as far as “who counts as kin” and what family means, were more complex and are not well studied. Harvard historian and prize-winning author Afsaneh Najmabadi explores what happened to everyday practices of the familial that ensued from the near imperial hegemony of these two ideas. How did men and women live their lives differently? How did expectations of women about marriage and sexual pleasure change once companionship and love became the primary signs of the modern marriage? How did the definition of who counts as kin change? And, what kind of relations began to fall out of the familial orbit; for example, two women’s vow of sisterhood or two men’s intimate friendship that made them brothers?

Afsaneh Najmabadi is the Francis Lee Higginson Professor of History and of Studies of Women, Gender, and Sexuality at Harvard University. She leads Women’s Worlds in Qajar Iran, a digital archive and website that explores women's lives in Iran's Qajar era (1796–1925) by providing bilingual access to a wide variety of documents, including manuscripts, personal papers, publications, photographs, and everyday objects. The project was recognized by the White House Office of Public Engagement in May 2012.

A historian of Iran, in particular its issues of gender and sexuality, Najmabadi began her education in the sciences, receiving her BA and MA in physics from Radcliffe College and Harvard University, respectively. She received her PhD in sociology from the University of Manchester in the United Kingdom.

In 2005, she received the Joan Kelly Memorial Prize from the American Historical Association for her book Women with Mustaches and Men without Beards: Gender and Sexual Anxieties of Iranian Modernity. With Kathryn Babayan, she co-edited Islamicate Sexualities: Translations across Temporal Geographies of Desire and is also the author of The Story of Daughters of Quchan: Gender and National Memory in Iranian History. Her most recent book, Professing Selves: Transsexuality and Same-Sex Desire in Contemporary Iran, was a finalist for Lambda Literary Award in 2014 and received the 2014 Joan Kelly Memorial Prize from American Historical Association. 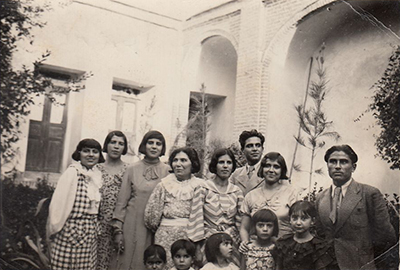 Family portrait: 4 July 1936. According to Afsaneh Najmabadi, this photograph was taken in the home of her maternal extended family, located in Hasanabad, a neighborhood of Tehran.

Cosponsored by the Department of Near Eastern Language & Civilizations and Alice Paul Center for Research on Gender, Sexuality, and Women.

Family portrait: 4 July 1936. According to Afsaneh Najmabadi, this photograph was taken in the home of her maternal extended family, located in Hasanabad, a neighborhood of Tehran.