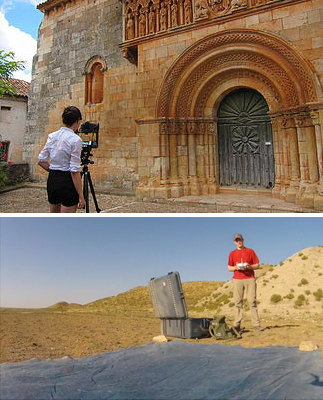 P.I.: Peter Cobb, PhD Student, Art and Archaeology of the Mediterranean World Program
Co-Investigator: C. Brian Rose, James B. Pritchard Professor of Archaeology and Professor of Classical Studies
A 3d computer model of the interior of the world's oldest extant wooden structure, a tumulus tomb chamber located at the archaeological site of Gordion in central Turkey. This reconstruction will increase our understanding of the final moments before the tomb was sealed, allowing us to investigate funerary practices and socio-political interactions in the Phrygian kingdom during the early first millennium BCE.

P. I.: Jessica Goldberg, Assistant Professor of History
Co-Investigators: Mark R. Cohen (Princeton), Marina Rustow (Johns Hopkins), Miriam Frenkel (Hebrew University), Phillip Ackerman-Lieberman (Vanderbilt)
The thousands of holograph letters, legal records, administrative documents, and business ephemera discarded in the Cairo Geniza by the medieval Jewish community of Cairo have over the last half century proved one of the richest sources for medieval Islamicate social and economic history, and are used in many fields as key comparative evidence. The proposed web- site would for the first time allow non-specialists to effectively deploy these sources in research and teaching, in addition to serving as a place for specialists to actively continue the work of editing documents, collecting, and sharing data.

Re-Making the Seventh Ward through Digital Mapping and Story-Telling

P.I.: Amy Hillier, Assistant Professor, City & Regional Planning, Penn
The Ward: Race and Class in Du Bois' Seventh Ward is a collection of web-based and printed materials dedicated to sharing the timeless lessons from W.E.B. Du Bois’ classic 1899 book, The Philadelphia Negro. In this pilot project, Prof. Hillier will redesign her interactive mapping interface, which integrates historical maps of the Seventh Ward with the stories, photographs, and documents of former Ward residents. The updated interface is intended to allow visitors to post, review, and comment on personal stories and photographs from former Seventh Ward residents.

P.I.: Elizabeth Lastra, PhD Candidate, Art History
The Virtual Pilgrimage Project aims to provide online access to medieval monuments along the Camino de Santiago de Compostela through new two- and three-dimensional photographic technologies. The project targets students, scholars and the general public; both aiming to enhance the range of resources used in the field—rectifying some of the current disadvantages and limitations facing art historical scholarship—and serving the growing global interest in the Camino.

P.I.: Zachary Lesser, Associate Professor of English, Penn
DEEP: Database of Early English Playbooks is a searchable database allowing students and scholars to study the publishing, printing, and marketing of English Renaissance drama through 1660. Since its launch in 2007 DEEP has logged over 150,000 page loads and has grown into a standard reference for the field. Starting in 2014, DEEP will undergo a significant upgrade and redesign in both its interface and back-end database.

P.I.: Heather Love, R. Jean Brownlee Term Associate Professor of English, Penn
Co-Investigators: Sharon Marcus (Columbia), Stephen Best (UC Berkeley)
The investigators are co-authoring a book for Harvard University Press entitled Surface Reading: History, Theory, Practice, which argues for the importance of descriptive practices of literary criticism through a reading of Herman Melville's Benito Cereno (1855). To accompany this print publication, they are building a website that will enable parallel line-by-line commentaries on Melville's text, commentary by readers, digitized versions of relevant historical and manuscript sources, and a set of tools that makes it possible for readers to closely describe the text and its contexts.

Forensic Audio Analysis to Determine the Provenance of Poetry Recordings

P.I.: Chris Mustazza, Director, Student Technology, School of Arts & Sciences Computing, Penn
Co-Investigators: Al Filreis and Charles Bernstein, Directors, PennSound
This project involves the digitization and analysis of a cache of poetry recordings made at Columbia University in the 1930s and ‘40s. These represent perhaps the first attempt to create and disseminate an archive of poets reading their own work. Starting in 1931, poets such as Vachel Lindsay and Gertrude Stein visited Columbia, where they were recorded on one of the first record-creation devices, a machine that could cut records from aluminum platters. The project will use sophisticated sound analysis tools to investigate the material artifacts of this recording process and to locate other recordings in PennSound that were recorded at Columbia as part of this series.

P.I.: Robert G. Ousterhout, Professor of Byzantine Art and Architecture and Director, Center for Ancient Studies, Penn
Destroyed by an earthquake in 749 CE, Beth Shean in the Galilee was excavated by the University of Pennsylvania in the 1920s, resulting in the Penn Museum holding approximately 8000 artifacts and 45,000 documents. Working with a graduate art history seminar (Spring 2014), Prof. Ousterhout will create an online exhibit, to include a digital archive, that will show the little-explored Late Antique history of the city. The site is also expected to serve as a template for organizing and cross-referencing the disparate artifacts and archival materials.

Mapping the Cultural Landscape of Gordion through Aerial Photogrammetry

P.I.: Lucas Stephens, PhD Student, Art and Archaeology of the Mediterranean World Program
Co-Investigator: C. Brian Rose, James B. Pritchard Professor of Archaeology and Professor of Classical Studies
Using an unmanned aerial vehicle this project will engage in aerial photogrammetric mapping of ancient features in a 20 km radius of the archaeological site of Gordion in central Turkey. Using this photographic data, the project will create 3D models and interactive GIS maps to understand the spatial and social configuration of the rapidly disappearing ancient landscape around the site.

P.I. Deborah A. Thomas, Professor of Anthropology and Africana Studies
“Tivoli Stories” is a multi-media installation and social memory project designed to create an archive of people’s experiences during the May 2010 state of emergency when Jamaican security forces entered West Kingston to apprehend and extradite Christopher “Dudus” Coke to the United States. The project seeks to provide a platform through which community members can publicly name and memorialize loved ones they lost, and raises questions regarding the normalization of this kind of state violence, and about the possibilities for transformation and repair.