But what those choices were; when, where, how and on what grounds they were made; and who got to make them, as well as determine the menu of options, have varied considerably across time and space, as well as across differences of class, race, gender, age, and belief system. So have those features of our lives that have been placed outside the realm of choice—informally or through legal prohibition--from aspects of sexuality, gender expression, and reproduction, to particular forms of art, such as those rooted in chance. This situation makes the rules around choice and their implications ripe for analysis from multiple perspectives.

Scholars have responded. Students of world religions and historians of all kinds, including those concerned primarily with language, literature, and art, have highlighted differences among what might be called “choice regimes.” Philosophers and political theorists have shown that these differences often have large political implications, from shaping notions of freedom to determining conceptions of responsibility, guilt, and even self. Scholars and practitioners of literature, film, and psychoanalysis, meanwhile, have demonstrated how choice-making structures narrative, shaping too the way individual life stories are told and understood. Feminists and scholars of race, ethnicity, and sexuality have underscored the differential levels of access, uses, and effects of choice across populations. And while behavioral psychologists have lately helped us to see why the whole business of choosing is so often fraught and how little the “rational choice” view of humans corresponds to what we really do, computer scientists, experts in decision science, and policy experts have been busy both figuring out how both to maximize our choice-making abilities, given our cognitive limitations, and to mold the contours (or “choice architecture”) in which we do.

A scholarly and public debate also exists today (albeit usually divided into different strands focused on the future of consumer culture, the future of democracy and human rights, or the future of literature and the arts) about what the contemporary investment in choice amounts to. Under what circumstances, precisely, does enhanced choice constitute a form of emancipation? Conversely, when does having more choices become a form of oppression, because we are overwhelmed by the number of options in the age of the internet, because opportunities are so unevenly distributed around the globe, or because some of the dire consequences of choice for the future of the earth are becoming increasingly apparent? This is, in part, a debate about the liberal democratic world order, but its roots go back deep in time, as do the roots of the many challenges and alternatives to this way of seeing the world still in existence. How can the study of a wide variety of societies and cultures grappling with choice, including those well in the past, help us think about our current situation—and vice versa?

For 2020-21, the Wolf Humanities Center will take up the theme of choice, broadly construed, to examine how processes of selection and decision-making have operated and been imagined around the world and across time, from pre-history and antiquity to the present and even into the future. 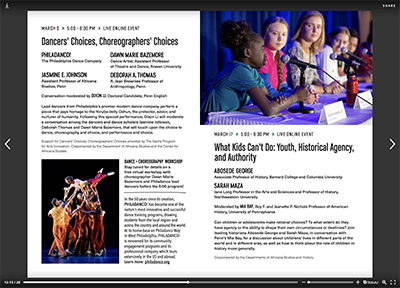